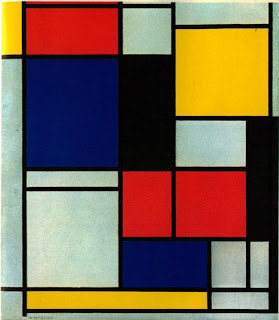 [Update Jan. 2014: Select System C, Rule 4 at the top of the page to run the system discussed in this post.]

David Eppstein wrote a blog post about my Fourier Life page over at the 0xDE blog.  One of his favorites is the Qix! rule set which he describes as producing a Mondrian-like rectangular subdivision.  I had to Google Mondrian to understand he was referring to the art of Piet Mondrian, such as in the picture on the left.

In case some of you youngsters out there don't know what Qix is, it was an arcade game back in the golden age of arcades (you know, the glorious 1980's).  I personally didn't like the game much, but it was a cool concept that was simple to explain but very difficult to master.  You can play a flash version here if you're up for it (remember to hold down X or Z when you move with the cursor keys to draw the lines).
Posted by Sean Murphy at 9:47 PM

The Story of Fourier Life