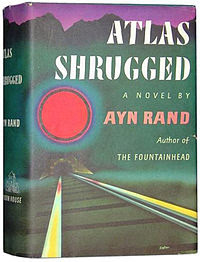 "Life is a process of self-sustaining and self-generated action."  Ayn Rand published those words in 1957 in her classic, Atlas Shrugged.  How is it that more than 50 years later we are still debating the definition of life?  Is it because Ayn Rand was an author and philosopher, not a biologist?  Is it because Rand defined life only as an intermediate step in making a bigger point about morality?  Here is the full quote from Atlas Shrugged:

There is only one fundamental alternative in the universe: existence or non-existence—and it pertains to a single class of entities: to living organisms. The existence of inanimate matter is unconditional, the existence of life is not: it depends on a specific course of action. Matter is indestructible, it changes its forms, but it cannot cease to exist. It is only a living organism that faces a constant alternative: the issue of life or death. Life is a process of self-sustaining and self-generated action. If an organism fails in that action, it dies; its chemical elements remain, but its life goes out of existence. It is only the concept of “Life” that makes the concept of “Value” possible. It is only to a living entity that things can be good or evil.


Note that Rand's definition doesn't describe replication.  Self-replication is a necessary property of life for a species to persist through time, but it is not a fundamental requirement of life.  Let's look at the definition in more detail.

First off, life is a process.  It is an attribute of objects, such as a mouse before and after it gets caught in a mouse trap.  Second, it is a process of action.  Living things metabolize, move and are far from equilibrium.  All of these attributes are summed up with the term "action."  Third, the action is self-generated.  Living things require energy and use it to act, i.e. live.  Finally, the action is self-sustaining.  The actions performed by living things work to keep the organism far from equilibrium and to keep it alive.

By Rand's definition, we can classify the following as alive or dead:
The Roomba robot sits in its charging base and, every day at a predefined time, goes out and cleans the floor.  When it's done or when its battery gets low, it seeks out its charging base to recharge its batteries.  Is this not a process of self-generated and self-sustaining action?

Ayn Rand believed definitions were contextual--they only need to distinguish between objects at the current state of knowledge.  Perhaps the definition needs to be updated to account for robots like the Roomba.  Or maybe we just need to consider our little housekeeping robot as a part of the family.
Posted by Sean Murphy at 9:00 AM

The Story of Fourier Life